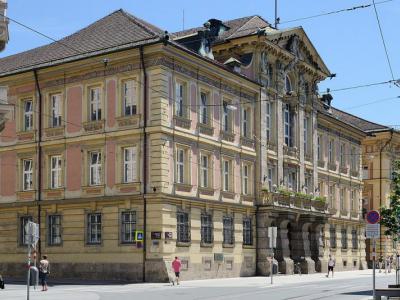 Altes Landhaus, also known as Standehaus or the Old State House, is the seat of the parliament for the state of Tyrol. The building was constructed in 1734 in the Italian Baroque architectural style. Court architect Georg Anton Gumpp modeled the building on the Palazzo di Propaganda Fide and the Palazzo Chigi-Odescalchi.

The building has continued to grow over the years as the state government expands. The first large expansion took place in 1870. The most recent was Landhaus 1, which opened in 2008.

The interior of the Old State House offers elaborate woodwork, statues, busts, ornamental vases and frescos. Arguably the most famous of these frescos are in the boardroom. THey were painted by Cosmas Damian Asam in 1734. The painting shows scenes from the Old Testament along with landscapes of the area as it appeared at the time.

A chapel, dedicated to St. George, is in the Old State House's courtyard. Built in 1730, the chapel features Ionic pilasters and bronze sculptures in the exterior niches. Inside, visitors can find Corinthian columns, a marble column, a wide number of statues and an organ that was installed in 2010.
Image Courtesy of Wikimedia and Taxiarchos228.