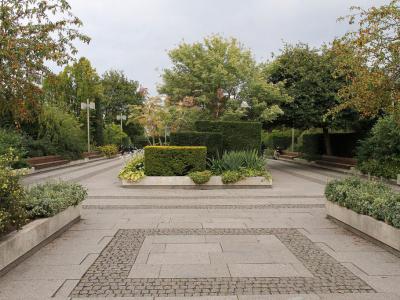 Amaliehaven also known as Amalie Garden is situated in central Copenhagen’s Frederiksstaden neighbourhood between the water front and the Amalienborg Palace. This small park was gifted to the city by the A.P. Moller and Chastine McKinney Moller Foundation in 1953.

The park was first created over an ancient shipyard established by Lars Larsen, a rich ship owner in 1802. Jean Delogne, the Belgian landscape architect designed this garden that was inaugurated in 1983.

The park is rectangle shaped with a large fountain at the center. The design is symmetrical and is exquisitely complemented by the naturally flowering plants. You will find two levels of the garden extending on either sides of the central fountain. One side of the garden is enclosed by the street and the other by walls and shrubs.

You will also find a stunning variety of flowers and plants in this garden. The effect is amazing with natural shapes of flowers contrasting the park’s geometric layout. If you visit Amaliehaven in April, you are extremely lucky as you will find the Japanese cherry trees in full bloom. These trees are indeed the highlight of this park.

All sculptures you find here are sculpted by Arnaldo Pomodoro, the famous Italian sculptor. There are four attractive abstract columns and water features that sprinkle jets of water.
Image by Michael MacKenzie on Wikimedia under Creative Commons License.