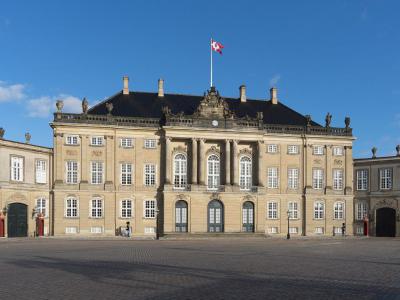 Amalienborg Palace is the official residence of the Danish Royal Family. This palace complex features four rococo palaces constructed between 1750 and 1758. All are built around the octagonal square where you will find King Frederik’s equestrian statue. King Frederik ruled Norway and Denmark between 1723 and 1766 and was instrumental in the construction of Frederiksstad of which Amalienborg palace is a part.

Land for the palace was acquired by King Christian IV who ruled Norway and Denmark between 1577 and 1648. Queen Sophie Amalie, King Frederik III’s consort constructed the first palace in this waterfront area between 1669 and 1673. This palace was destroyed by fire in 1689.

King Frederik IV constructed the second royal palace at Amalienborg during his rule between 1671 and 1730. This was a two-storied small summer residence that featured a charming French garden. It was named Sophie Amalienborg.

In the 1980s the palace was restored as residence for the Crown Prince, storage facilities for the Queen’s Reference Library and a museum for the Royal House of Glücksborg. The museum features private royal apartments from 1863 to 1947 including original fittings and furnishings.

King Frederik V, in his effort to create a separate city outside Copenhagen, constructed Frederik’s City or Frederiksstad that featured exclusive homes for the noble families and aristocrats. All buildings were in Baroque style. Later on, additions were made to these buildings in rococo architectural style. Make sure you include Amalienborg Palace in your itinerary when you visit Copenhagen.

Why You Should Visit:
Considered as one of the best examples of the Rococo architecture style, this complex is beautifully preserved and feels more intimate than its European counterparts.

Tip:
Arrive at midday for the changing of the guard, an interesting display that takes around 10 minutes.