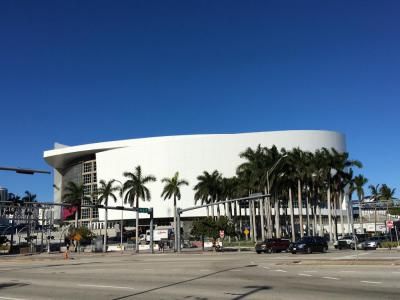 Known locally as the "triple-A" or "A³" (A cubed), The American Airlines Arena is a popular sports and entertainment venue located in Downtown Miami alongside Biscayne Bay. The arena was constructed from 1998 and was intended to replace the Miami Arena, serving as a home to the Miami Heat of the National Basketball Association.

The venue can be configured for concerts, family events, musical theater and other stage performances. Housed within the AAA Waterfront Theater is Florida's largest theater, capable of seating between 3,000 and 5,800 spectators at a time. For concerts in an arena configuration, its end stage capacity can vary between 12,202 for 180° shows and 18,309 for 360° shows. For center stage concerts the arena can seat up to 19,000+ viewers. Over the years, the AAA has seen the likes of international performers such as Mariah Carey, Cher, Britney Spears, U2, Shakira, Tina Turner, Celine Dion, Lady Gaga, Jennifer Lopez, Madonna, Katy Perry, Janet Jackson, Rihanna, and Adele.

Among many other things, the arena is known for its unusual scoreboard designed by artist Christopher Janney. Drawing on the underwater anemone forms, this scoreboard can change colors depending on the atmosphere.
Image by Phillip Pessar on Flickr under Creative Commons License.
Sight description based on wikipedia