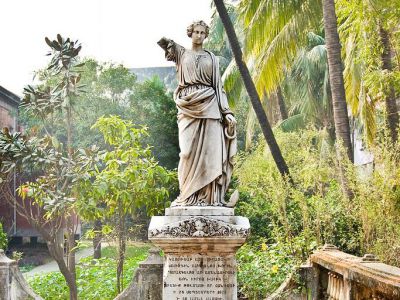 The Armenian Church is a historically significant architectural monument situated in the Armanitola area of old Dhaka. The church bears testimony to the former existence of a significant Armenian community in the region. In 1781 the now-famous Armnenian Church was built on Armenian St in Armanitola, a once thriving business area. The site was an Armenian graveyard before the church was built and the tombstone area that continues to exist serves as a chronicle for the history of Armenians in the area. Agaminus Catachik, an Armenian, gave away the land to build the church and it has been alleged that "Michel Cerkess, Okotavata Setoor Sevorg, Aga Amnius and Merkers Poges helped to build the church."

Over fifty years following the construction of the Armenian Church, a clock tower was built on the western side of the structure. A rumour subsequently circulated regarding the clock, stating that the clock sounded four miles away and that people sychronised their watches in accordance with the sound of the tower's bell. In 1880 the clock stopped and the tower was destroyed in 1897 as the result of an earthquake. In the old Armenian graveyard, amongst the 350 people buried there, the grave of Armenian Catachik Avatik Thomas continues to be adorned with a statue of his wife. The statue was bought for this specific purpose from Kolkata and the grave was inscribed with the words "Best Of Husband".
Image by naquib on Flickr under Creative Commons License.
Sight description based on wikipedia

Want to visit this sight? Check out these Self-Guided Walking Tours in Dhaka. Alternatively, you can download the mobile app "GPSmyCity: Walks in 1K+ Cities" from iTunes App Store or Google Play. The app turns your mobile device to a personal tour guide and it works offline, so no data plan is needed when traveling abroad.