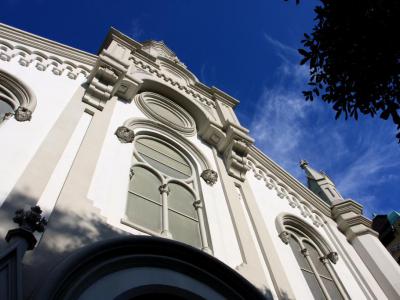 Ascension congregation is one of the oldest in Savannah, dating back to 1741. The building itself wasn't completed until 1878, after a string of other temporary churches were built on the current church's lot. It is a combination of Norman and Gothic styles, designed by architect George B. Clarke in 1875.

During the Civil War, the church was turned into a temporary hospital for sick and injured Civil War soldiers. Pew cushions became beds, and the pews themselves were splintered for firewood. This seriously damaged the interior of the church, but not irreparably so. Renovations began in 1875, and the church was fixed up, a second story was added, the Ascension window was installed, and the new building was dedicated by 1879.

The most notable feature of the current church is its magnificent Ascension Window, from which it gets its name. Flanking the Ascension window are stained glass windows featuring scenes taken from the life of Christ. The church also houses other notable works of art, including murals and other stained glass windows. The Luther Rose Window is a large rose window above the Luther window, a stained glass work featuring Martin Luther before the Diet of Worms. A marble altar features a mural of Leonardo da Vinci's Last Supper.
Image by TravelingOtter on Wikimedia under Creative Commons License.