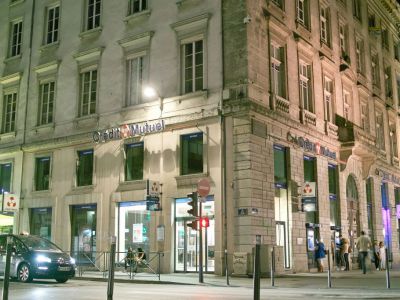 Vieux Lyon is fascinating with its traboules and historic buildings; while you are visiting this area don’t miss l’Auberge du Gouvernement.

The building had long been an inn called l’Auberge de St Christophe but when the governors of the city were housed in a town house on the same square in 1512, it changed its name. The town house was pulled down in 1730, but the inn continued to be frequented until the 19th century; the coaches bound for Auvergne and the south-west left from there.

The Gothic-style building has five floors and two bays. It has mullioned windows with small columns and the heads of mythological animals at their bases. Most of these heads are now missing, but a few have survived.

The entrance to the inner courtyard is fronted today by a railed gate which replaced the stout timber door, but parts of the framework remain embedded in the walls. The inner courtyard is reached by a short slope cut into the stone. The archway is in the shape of a basket handle with a double-cross ogival vaulted ceiling and has a mermaid and a griffon at its base

The courtyard is linked by galleries and two traboules. When you have passed under an ogival-vaulted loggia you will find yourself in the raised courtyard (the former stables were beneath it), where you will see more mullioned windows, a door bearing an ancient coat of arms, and in one corner a well in the form of an open scallop shell.
Image by Keiichi Yasu on Flickr under Creative Commons License.