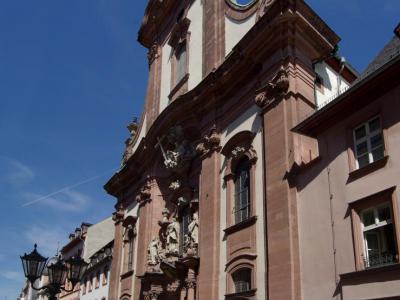 St. Augustine's Church has a vibrant Baroque-style facade. The portal has statues depicting the coronation of Mary, Queen of Heaven along with Augustine of Hippo and Monica of Hippo.

The church's interior is ornately decorated and features Rococo style. The church has a combined nave and choir, which is typical for Rococo-style churches. The large altars and magnificent ceiling paintings create a grand impression.

Between the south altars, visitors will see a wood sculpture dating to 1420. The sculpture shows Mary with Jesus as a child, smiling and laughing. The high altar depicts God the Father tearing up Mankind's Book of Sins.

Johann Philipp Stumm manufactured the majestic 1773 Baroque pipe organ, which is one of the few surviving organs crafted by the acclaimed Stumm family.

St. Augustine's Church was one of the few churches in Mainz that wasn't heavily damaged by World War II bombs.
Image Courtesy of Wikimedia and Berthold Werner.