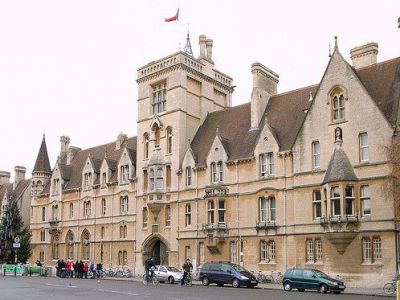 Balliol College stands on Broad Street and was founded in 1263, making it the second oldest of Oxford University’s colleges. It was established by John de Balliol who was once the Sheriff of Nottinghamshire – but not at the time when Robin Hood and his Merry Men hung around Sherwood Forest!

Nothing of the original building has remained these days; the oldest parts date back to 1431 and are the north and west ranges of the Front Quad, although the Masters’ Dining Hall, the libraries, and the Senior Common Room are perhaps a little older. The buildings around the Garden Quad are newer: the south-west side was built in 1720, the Fisher Building in 1759, the west side in 1826, the Masters’ Lodgings in 1860 and the Junior Common Room in 1912. The chapel, which was designed by William Butterfield, was built in 1857.

Most of the colleges have deeply-rooted traditions, but Balliol’s favorite one dates back to the 1960s, when a student introduced a tortoise, named Rosa, to the college. Rosa lived here for 43 years; the person looking after her well-being at any given time was called the Comrade Tortoise, and it was a coveted position. Rosa disappeared in 2004 but another tortoise has taken her place.

Every June, Corpus Christi College organizes a tortoise race and students bring tortoises from home to participate. With Rosa, Balliol College won the race three or four times and they have high hopes for her replacement.

Another traditional and rather fierce rivalry, lasting for many years, is that between the students of Balliol and those of its immediate neighbour to the East, Trinity College. It has manifested itself on the sports field and the river; in the form of songs (of greater or less offensiveness) sung over the dividing walls; and in the form of "raids" on the other college.

Balliol's alumni include the incumbent (2020) Prime Minister of the United Kingdom, Boris Johnson, as well as three former prime ministers (H. H. Asquith, Harold Macmillan and Edward Heath), Harald V of Norway, Empress Masako of Japan, five Nobel laureates, and numerous literary and philosophical figures, including Shoghi Effendi, Adam Smith, Gerard Manley Hopkins, and Aldous Huxley. John Wycliffe, who translated the Bible into English, was Master of the college in the 1360s.
Image by stevecadman on Flickr under Creative Commons License.
Sight description based on wikipedia