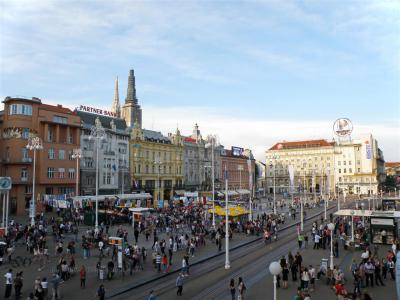 Ban Jelačić Square is the central square of Zagreb, named so after ban (governor) Josip Jelačić. The square has existed since the 17th century. Initially it was called Harmica. It features buildings belonging to different architectural styles, such as classicism, secession, and modernism. The oldest standing building is situated at 18 Ban Jelačić Square. In the middle of the square stands a statue of Josip Jelačić on a horse, created by Austrian sculptor Anton Dominik Fernkorn. The statue was originally installed on October 19, 1866, by Austrian authorities, despite protests from Zagreb councilmen. Nearby, in the eastern part of the square, is the Manduševac fountain.

Why You Should Visit: This is literally the center of Zagreb which makes it a convenient meeting place for both locals and tourists. There are many shops and restaurants in the nearby streets and the public transport runs through the square. Most other attractions can be reached on foot from this location.
Image Courtesy of Wikimedia and Lamasse.
Sight description based on Wikipedia.