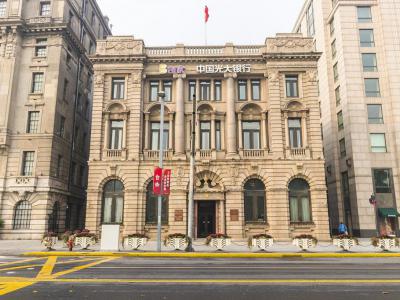 The renaissance structure called the Banque de l’Indochine Building stands at No:24 the Bund, Shanghai. The bank was established by the French to manage their trade interests and financial assets in China. As a French colonial bank, The Bank de l'Indochine also held sway over properties in the French colonies of Vietnam, Cambodia and Laos. After the success of the Qing Dynasty in quelling the Boxer rebellion, European countries like France that helped the rulers were rewarded by the Boxer Indemnity. The indemnity allowed them to set up trade facilities in the city. The bank shifted its entire operations to Shanghai from the French colonies in 1889 to facilitate French trade with China.

As trade between the two countries increased, a large building was required for its offices and the present structure was built. Designed and built by architectural firm, Atkinson and Dallas, The bank de l’Indochine building opened its doors in 1914. It had an Italian renaissance style and a typical French interior design. The building is divided into three parts horizontally and vertically with a baroque style arched gate and Ionic columns.

The Bank de l’Indochine closed its doors in Shanghai after the Japanese occupation in 1941. Today, the building houses the Shanghai branch of the Chinese Everbright Bank.
Image Courtesy of Wikimedia and ScareCriterion12.