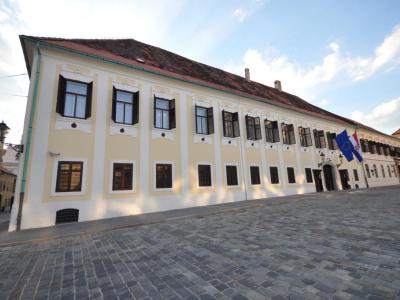 Banski Dvori is a historic building on the west side of St. Mark's Square and is the official residence of Croatian Government. This long, two-story Baroque palace was built by Ignjat Đulaj in the first half of the 19th century. On October 7, 1991, the building was damaged by a powerful explosion, reportedly caused by a rocket fired by the Yugoslav People's Army in an attempt to simultaneously hit Franjo Tuđman, the newly elected president of Croatia, Stipe Mesić, the president of Presidency of Yugoslavia, and Ante Marković, the Yugoslav prime-minister, all of whom were lucky to survive.
Image Courtesy of Flickr and MConnor.
Sight description based on Wikipedia.