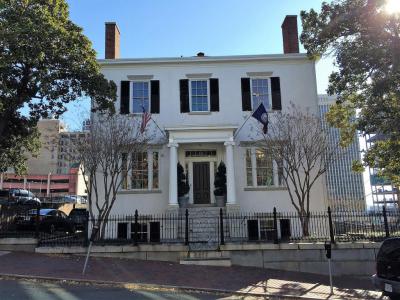 The William Barret House in Richmond is a mid-19th-century house, and has been list on the National Register of Historic Places since 1972.

Since it ceased use as a private residence, the Barret House has been used by a variety of organizations and for various purposes. The Navy League Club used it as a social club for sailors during the Second World War, and it later served as the offices for the Virginia Society of the American Institute of Architects Virginia Foundation for Architecture (now the Virginia Center for Architecture) and an antique book store — all which relocated in 2005 to Branch House on Monument Avenue.

Since 2009, Barret House has served as the corporate headquarters of an asset management firm.
Image by Mojo Hand on Wikimedia under Creative Commons License.
Sight description based on wikipedia