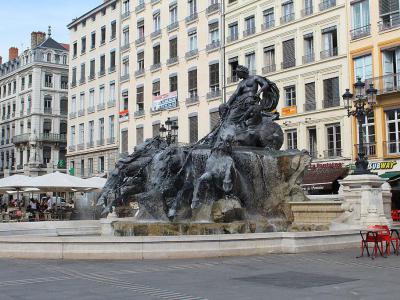 While every town or city in France is proud of its fountains, Lyon justifiably takes pride in its most famous one – Bartholdi Fountain – on Place des Terreaux.

The fountain was designed by Frédéric Auguste Bartholdi in 1889 and manufactured by Gaget and Gautier. It was originally intended for the city of Bordeaux when first exhibited at the Exposition Universelle of 1889. After the show, however, the mayor of Bordeaux perceived it too expensive for his city, and so the fountain was bought by the mayor of Lyon in 1890.

The centerpiece of the fountain is an allegorical sculpture of the River Garonne, called the “Char triumphant de la Garonne”, featuring a woman with a small child in a chariot drawn by four water horses. The statue is made of lead on an iron frame; it weighs 21 tons and is 4.85 meters high.

The woman figure represents the Garonne and the four horses with their bridles of water weeds represent its four main tributaries, namely: the Tarn, Ariège, Lot and Gers. The horses are leaping and plunging, thus symbolizing these tributaries jumping into the sea. However, since placed in Lyon, the woman figure is believed to be representing the River Saône instead.

Architect Bartholdi is best known for his other major works, like the Lion of Belfort created in 1879 and the Statue of Liberty in 1886.
Image by Chabe01 on Wikimedia under Creative Commons License.