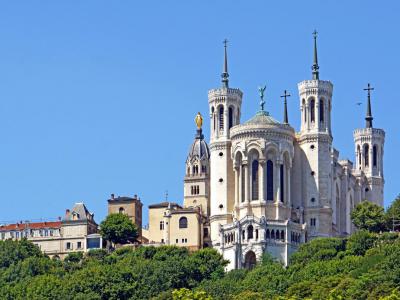 You may be forgiven to think that the Basilique de Fourvière is the most important church in Lyon, considering its elevated, eye-catching position on top of the eponymous hill, some hundreds of meters above the River Saône.

The church stands on the site of a Roman forum of Trajan and an early Christian temple, and was built in 1872 by Pierre-Marie Bossan showing an unusual departure from the then fashionable Gothic style towards a mixed Romanesque-Byzantine appearance.

Funded privately by the nobles of Lyon, the temple was built in white stone with crenelated walls and four main towers. A gilded statue of Virgin Mary tops the bell tower.

In fact, there are two churches there, standing one on top of the other. It is only when you learn that the church was built and decorated to show off Catholic wealth after France’s humiliating defeat in the Franco-Prussian War of 1870, that you start to realize that everything there is a slightly over-the-top. But never you mind, just forget the past and enjoy the beauty of the present.

The interior is quite simply breathtaking, with magnificent wall frescoes, elaborate mosaics on the upper arches and the ceiling, marble statues and beautiful stained glass windows. The crypt of Saint Joseph is as beautifully decorated as the rest of the building.

Between the church and the adjoining Chapel of the Virgin is a terrace that affords great views of the city, but if you want to see Lyon in all its splendor, there is an observatory on top of the north-east tower, with only 297 steps to climb!
Image by Dennis Jarvis on Flickr under Creative Commons License.