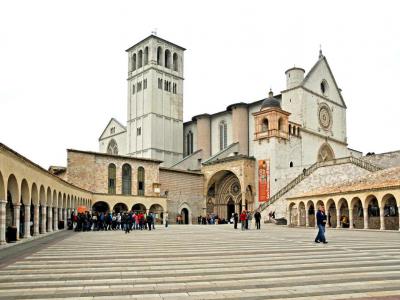 Basilica of Saint Francis of Assisi, Assisi (must see)

Francis died at the age of 44. But two years later, he was canonized in Assisi. On that day, July 16, 1228, Pope Gregory IX blessed the cornerstone of the Basilica and "Mother House" of the Franciscan order. Two years after that, the body of Francis was secretly buried in the unfinished Basilica.

The Basilica dedicated to Saint Francis is actually two churches, one over the other and encircled by two arcades. The churches were designed by Jacopo Tedesco. Actual construction was managed by Brother Elias of Cordona, a follower of San Francis.

The reason for two churches is not clear. The Romanesque Lower Basilica was built on the tomb of Saint Francis in accordance with ancient Christian burial customs. The upper church is supported by the lower church's oversize cross vaults and pilasters.

Saint Francis' body is laid in a sarcophagus under the high altar. The church is decorated with fresoes. In the central nave is one on the life and passion of Saint Francis. There is one on Mary Magdalene by Giotto. Above the altar is a frescoe of the Saint and allegories of poverty, chastity and obedience.

On the presbytery walls is Cimabue's Virgin with child, angels and Saint Francis. On the left wall Giotto has painted the crucifixion. Lorenzetti has depicted the childhood and passion of Christ. Simone Martini has rendered Madonna and child among the saints.

Stairs in the nave lead to the crypt. Here is a plain, unadorned place, lighted by a single oil lamp. Simplicity and austerity were two qualities prized by the saint who lies here.

If the lower church is plain and austere, the upper church is bright and spacious, made for liturgies. It has a nave of four bays and a cross-vault ceiling decorated with gold stars on a blue background. Next to the altar is a papal throne. The choir is provided with 102 wooden stalls with carvings made by Domenico Indovini in 1501.

The upper part of the nave is painted with scenes from the Old Testament and the new testament. In the lower part of the nave are 28 frescoes credited to Giotto. The cuspidate facade has a Gothic portal and a brilliant rose window.

Why you should visit

The spirit of Saint Francis is in every street and every building, but this the heart of Assisi.
Image Courtesy of Flickr and Dennis Jarvis.