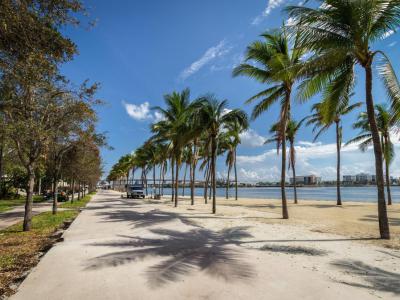 Bayfront Park is a large green space in downtown Miami sprawled near the financial district and the American Airlines Arena. The park is located on Biscayne Bay and is the venue of many commemorative events.

Bayfront covers an area of 32 acres and was established after the city of Miami acquired a strip of waterfront land from the Florida East Coast Railway. The first designs were made by architect Warren Henry Manning and the park was opened to the public in 1925. In 1980, it was extensively remodeled by the Japanese American modernist artist and landscape architect, Isamu Noguchi, who is rightfully considered to be one of America’s greatest 20th-century artists.

Bayfront Park is now managed by a limited agency of the City of Miami, called the Bayfront Park Management Trust. It is the venue of many important celebrations like the Independence Day Celebrations and the Official New Years Eve party. There is an amphitheater within the park that seats over 10,000 people, a small open-air pavilion called the Tina Hills Pavilion with a seating capacity for 1,000 people, and in the southeast corner of the park there is a monument dedicated to the astronauts who lost their lives in the tragic space accident in the 1980s.

Why You Should Visit:
The closeness of water, enhanced by the latest extension to the Miami River, makes this place very special.
The area allows visitors to enjoy beautiful downtown skyline and bay views. Live music in the amphitheater and the always friendly mood makes it particularly inviting.

Tip:
Check online schedule for the many activities that are always happening in this park.