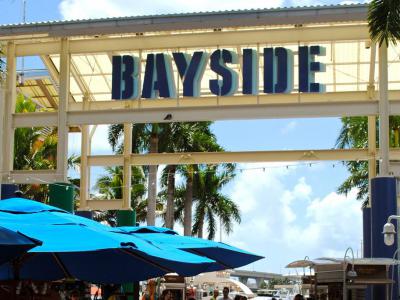 The Freedom Tower is a 17-floor structure located on the Wolfson campus of Miami Dade College. It has become the symbol of freedom to Cuban refugees who fled to Florida from the communist regime of Fidel Castro.

Bayside Marketplace is a festival marketplace in the heart of Downtown Miami, located between Bayfront Park to the south and the American Airlines Arena to the north. Just as the name suggests, the venue wraps along the banks of Biscayne Bay. Visitors to Bayside Marketplace can experience real Miami as a home of impeccable international cuisine, fine shops, and exotic music in a beautiful, waterfront setting.

The two-level, open-air festival center opened its doors for the first time in 1987 amid a major real estate boom in the city. Instead of being planned to revitalize a specific area, this entertainment complex complements an existing marina with more than 150 shops, including unique and national retailers such as Guess, GAP, and Victoria's Secret, as well as 12 delicious restaurants, such as Bubba Gump, Hard Rock Café, and The Knife.

The shopping center has been frequently featured on the crime drama TV series, Miami Vice. Being the number one most visited tourist attraction in Miami, Bayside Marketplace attracts on average 15 million people annually who come to enjoy the sunshine and a dose of Latin flavor combined with a few drinks by the water or hop on a refreshing Bay cruise.

Why You Should Visit:
Restaurants overlooking the dock, many boating activities – jet boats, sunset cruises, etc. Overall, friendly and very culturally diverse.
Nice atmosphere through the day, but especially in the evenings, when there's always something going on, live, on the main podium.

Visiting Miami you are very likely, at some point, to end up in South Beach. One of America's preeminent resorts known for its beaches and the glamorous scene around its happening nightspots and celebrity-chef eateries, this trendy and quirky neighborhood, nicknamed colloquially as SoBe, attracts the rich, famous, and youthful for almost a century, and is generally a fun place to be. Apart...  view more

Often dubbed the “Capital of Latin America,” Miami could have been just another deep-South city in Florida if it wasn't for Cuban revolution of 1959 that sent waves of Cuban refugees to Miami swiftly transforming the city's central neighborhood, once known as Riverside, into Little Havana.

The strong Cuban influence here is felt primarily in an eclectic mix of traditional...  view more

The coastal sunny city of Miami is a world-class destination for tourists, rich in sights and public venues. The city was off to a humble start on July 28, 1896 with a population of just over 300 people. Miami owes its existence to a woman and is the only major U.S. city founded by a female. Julia Tuttle, "the mother of Miami", was a local citrus grower who originally owned the land the...  view more

The South Beach neighborhood of Miami Beach, Florida has long been associated with Art Deco architecture, distinguished for its eye-catching bright pastels. Pops of color combined with the style’s notable geometric lines, sleek curves, chrome accents, window “eyebrows” and fountains abound in the area, but even more so in the historic Miami Beach Architectural District.