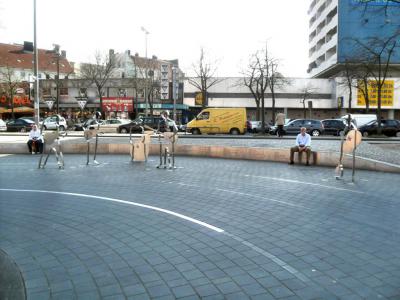 Beatles Square is a plaza that commemorates the Beatle's connection to Hamburg. The plaza is circular and represents a vinyl record. Statues represent John Lennon, Paul McCartney, Stuart Sutcliffe, and George Harrison. In addition, a hybrid statue represents Pete Best and Ringo Starr, who each played with The Beatles in Hamburg.

In the early 1960s, The Beatles spent two years playing in Hamburg's small musical venues. The Beatles had few opportunities to play in their Liverpool hometown but were given an official invitation to play in clubs in Hamburg.

The Beatles made their first recording, "My Bonnie", in Hamburg. The Beatles often stayed in apartments and rooms above the venues they played in. The band members racked up debt at various Hamburg bars, and police detained them for being a public nuisance.

The Beatles would play for seven hours at a time during the week and eight hours at a time on the weekends. They spent endless hours rehearsing, and band members count the Hamburg years as essential to their development.
Image Courtesy of Wikimedia and Jivee Blau.