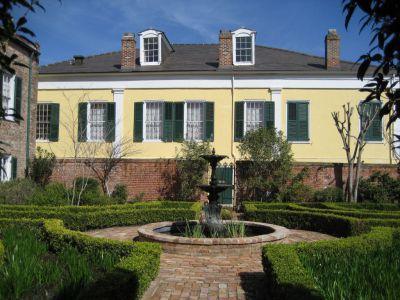 The Beauregard-Keyes House is significant and worth a tour for its Greek Revival architecture, lovely quaint garden, and for once having been the residence of Confederate General Pierre Gustave Toutant Beauregard, a New Orleans native who ordered the first shots of the Civil War and remained a hero in the South long after the war was lost. Ursuline nuns used the property from the early 1700s until the 1820s when the new house was designed to combine elements of a Creole cottage with Greek Revival features, including a Palladian facade, curved twin staircases, Tuscan portico, and generous dining room.

In 1945, author Frances Parkinson Keyes was looking for a place to write and live in New Orleans. She stumbled onto the property and spent the next 25 years restoring the historic gem to its Victorian roots and writing novels, one of which was set in the house and included Beauregard as a character; another was based on Paul Morphy, the grandson of the original owner, considered to be one of the greatest modern chess masters. Keyes was already an avid collector and her collection of veilleuses (a teapot that also has a cup and a night light) is the second-largest in the world. Make sure to also view the many antique dolls, French sofas, rare porcelain tea pots, and numerous fans and folk costumes displayed.

Tip:
The tour ends in the small but well-stocked gift shop (and that is where you pay your admission, at the end!). Note that the gardens can also be accessed without the tour.