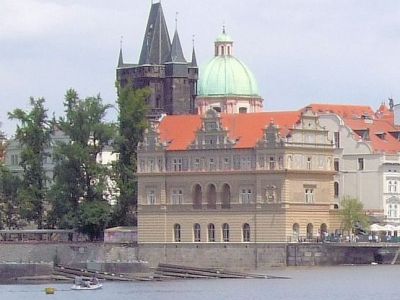 Housed in a Neo-Renaissance building that once was the Old Town waterworks near the Charles Bridge, the Bedrich Smetana Museum was opened in 1936 and is dedicated to Bedrich Smetana, the 19th century compositor and patriot.

Bedrich Smetana lived from 1824 to 1884 and was considered as the father of Czech music. He wrote a lot of patriotic music and his 1st Nationalist music was composed of marches used during the 1848 Prague Uprising. His best known opera “The Bartered Bride” was premiered in the new Provincial Theatre where only Czech music was played. He was a member of the society that founded the Czech National Theatre in 1884.

The museum is dedicated to his life and works and you can see many of his music scores, diaries and manuscripts. There is also a microscope under which you can admire his ear bones – he became deaf in later life. There is also a small section about musical life in the 19th century. A podium with a laser pointer will allow you to select Smetana’s and other classical music of his time.