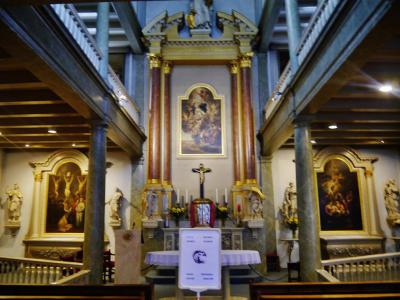 The Begijnhof Chapel, dedicated to Saint John and Saint Ursula, is a Roman Catholic chapel run by the Congregation of the Blessed Sacrament, in the St Nicholas Parish of Amsterdam. Here the commemoration of the Miracle of Amsterdam is maintained. The first steps in the construction of the present chapel were taken as early as 1665, after joining two houses bought for that purpose at the initiative of parish priest Van der Mije (1665-1700); his nephew laid the foundation stone on 2 July 1671. The municipality approved the building plans on condition that the building did not look like a church from the outside. The chapel was designed by the Catholic architect in Amsterdam, Philips Vingboons (1607-78), and was dedicated to St John the Evangelist and St Ursula. In its present form, it has a gallery with a left and a right section, resting on six wooden columns. The front with its leaded ogive windows dates only from the 19th century.

Why You Should Visit:
Great place to see a different side of Amsterdam; very quiet and peaceful even though you are in the middle of the city.
Can be easily combined with a visit to Amsterdam Museum.
Image by Zairon on Wikimedia under Creative Commons License.
Sight description based on wikipedia