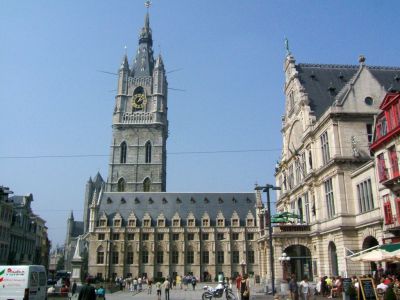 There are three medieval towers rising over the old city of Ghent: Saint Bavo Cathedral, Saint Nicholas' Church and the 298 foot Belfry of Ghent. The building of the Belfry tower began in 1313, following the designs of master mason Jan van Haelst. Wars, pestilence and politics slowed progress but the tower was completed in 1380.

At the peak of the tower sits the latest version of the gilded Dragon of Ghent. The original dragon, installed in 1382, was acquired by Count Baldwin IX of Flanders and brought to Bruges. It later became a war trophy of Ghent. Meant to protect charters and documents stored in the tower, the Dragon became a symbol of the city's power.

The upper reaches of the tower have been rebuilt occasionally to allow for a growing number of bells. The campanile was finished in 1771 with a spire designed by architect Louis 't Kindt. A neo-Gothic spire was installed in 1851. It was replaced in 1913 by the stone spire of today.

Historically the belfry bells were used to announce the time, sound warnings and announce victories. The great alarm bell called "Roland" was installed in 1325. After he had subdued an uprising in Ghent, Holy Roman Emperor Charles V ordered Roland removed.

Henry Wadsworth Longfellow wrote:
"...I am Roland! I am Roland!
There is victory in the land!"

Why You Should Visit:
Climbing this tower on your visit to Ghent is imperative! Not excessively high, but still allows a very pretty view of the city and of the Cathedral right next to it.

Tip:
Stick around for the chiming of the bells on the hour. You can watch how the bell mechanism works from the inside or stand outside on the corridor and just listen. The admission forms part of the CityCard Gent so if you plan to visit multiple attractions, you might save a few euros by buying a CityCard.