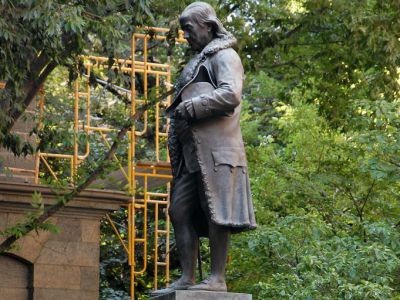 In front of the old City Hall, on the spot where the original Boston Latin School once stood, you will find the Benjamin Franklin Statue.

The 8-foot bronze statue was executed by Richard S. Greenough and put in place in 1856. It was the first statue of a human to be placed in any city in America. A lot of people think that Benjamin Franklin was President of the United States, but in fact, although he was one of the Founding Fathers, a statesman, diplomat and the Ambassador to France, he was never a president.

Benjamin Franklin was born in Boston in 1706 and his father, who wanted him to become a clergyman, sent him to the Latin School. He didn’t finish his schooling and went to work for his brother who had a printing press. Franklin began to publish his own articles and moved into the field of politics, where he was a staunch advocate for the abolition of slavery and the protection of Native American rights. He was the only person to have signed all four of the most important documents in American History: the Declaration of Independence, the Alliance with France Treaty, the Peace with Great Britain Treaty, and the Constitution of the United States.

Benjamin Franklin was also a scientist; in 1749 he invented the lightning rod. In his role as a statesman, Franklin formed the 1st public lending library and the 1st fire department in Pennsylvania.

Tip:
The statue would probably have better light for photographing in the morning, but you'd still manage to get a decent photo in the afternoon as well.
Ruth's Chris Steak House is right there, so if you're a meat eater, that is a good place to stop, but be forewarned – there are many many more historic restaurants further down the Freedom Trail.
Image by julz91 on Flickr under Creative Commons License.