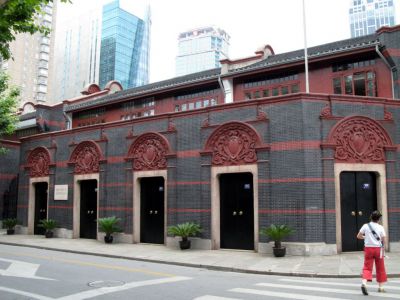 July 23, 1921, is the day the Chinese Communist Party (CCP) was founded, but very few realize that its "birth" actually took place in Shanghai. It was here that the CCP held its First National Congress, thus charting the course to what later became the People’s Republic of China and subsequently transforming this unassuming shikumen block into one of China's most venerated communist shrines.

Despite elements of propaganda, this place gives a fairly good account of events of 1921. There's a little exhibition hall with curious artifacts and photographs, combined with the exhibits related to the broader Chinese history and Shanghai history, in particular. Among other things displayed here is a waxwork diorama of young Mao Zedong and his comrades. The curators really have done a good job fitting so many displays into a relatively small space.

In order to get in, you'll need a ticket, but the tickets are free and provided next door to the museum entrance. Once inside, seek to avoid guided Chinese groups whenever you can, as the space gets crowded almost immediately.

Overall, a visit to this 'shrine' of Chinese Communism is a great contrast to the hum of Starbucks just around the corner, jam-packed with locals guzzling their chai lattes and enjoying free Wi-Fi – a juxtaposition of old and new, communism and capitalism...
Image by WiNG on Wikimedia under Creative Commons License.