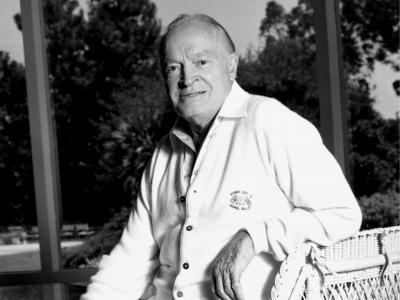 This five-bedroom, seven-bath home was occupied by comedian Bob Hope and his wife Dolores for many years. The Hopes owned three properties in Palm Springs over their time in the town. This house, which sits on 16,000 square feet in a park-like setting, surrounded by a privacy hedge and citrus trees, is gracefully modern. The house was built in 1935; it features an enormous swimming pool and a large patio with a retractable awning. There is a small detached casita with a private entrance for guests.

Bob Hope's career spanned almost 80 years. Best known as a comedian, he appeared in more than 70 films, 54 of which he was the star. He was also an actor, vaudevillian, dancer, singer, and author. He also made 57 tours with the USO to entertain American troops overseas.
Image Courtesy of Wikimedia and Allan warren.