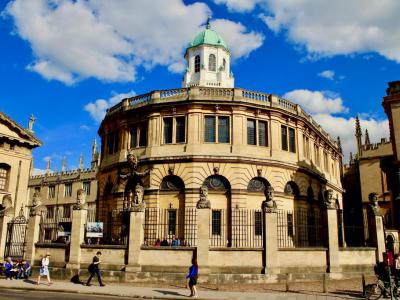 Bodleian Library is the main research library of Oxford University, and if you are not a student, you can visit it on a guided tour which should be booked in advance.

The Bodleian is one of the oldest reference libraries in Europe and one of the six legal deposit libraries in the United Kingdom, which means that a copy of every book published in the UK and Ireland is required by law to be deposited here.

The 1st library was founded by Thomas Cobham, the Bishop of Worcester, in the 14th century. It was a chained library – the books were chained to the shelves to stop people pinching them. In 1437, after the Duke of Gloucester donated a vast number of manuscripts, the building proved too small, so Duke Humphrey’s Library was built at Divinity School.

Over the years, the library fell into disuse until 1598 when a Fellow of Merton College, Thomas Bodley, had the place renovated and enlarged to receive his collection of books. It reopened in 1602 and took its present-day name. It was also Bodley who made an agreement with the Stationer’s Company in 1610 to put a copy of each of their books in the library. This agreement became the Deposit Law in the 19th century.

The library expanded in 1612 and 1637 and grew popular with Fellows to donate or bequeath their collections. The New Library was built in 1937 and today a tunnel under Broad Street connects the Old and the New Bodleian.

The library holds a staggering 11 million books and other reading matter, 117 miles of shelves and 400 staff members. Among the ancient manuscripts here is a copy of the Magna Charta and the Song of Roland. It also houses one of the last copies of the Guttenberg Bible.

***Harry Potter Tour***
Hidden away in the Bodleian Library, the Duke Humfrey’s reading room revels in a magical atmosphere. Boasting imposing high walls and an intricately painted ceiling, even the smallest of Harry Potter fans will fail to ignore this eye-catching beauty. Presented as the main Hogwarts Library in the film series, it is most memorable for the scene in The Philosopher’s Stone, when Harry uses his Cloak of Invisibility to sneak into the restricted section of the library. We see Harry creeping around here before he is given away by a screaming book.
Image by subherwal on Flickr under Creative Commons License.