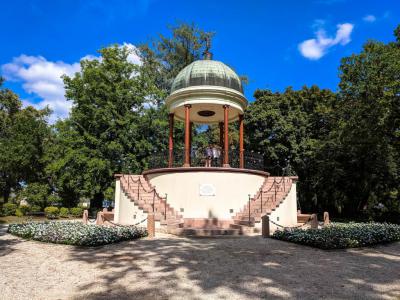 The musical well on Margaret Island is an exact replica of the first of its kind in the world, built by Hungarian gadgeteer and mechanical engineer Péter Bodor for the Transylvanian town of Marosvásárhely (now Târgu Mureş, Romania) between 1820 and 1822. The well has a round floor-plan, with two arched stairs on the sides, and a dome roof with a statue of Neptune (Apollo) at the top.

Whereas the Bodor's original well was destroyed in 1836 by a snowstorm and was never restored, this almost identical copy (that did not operate by hydraulic means, but used electricity instead) built on Margit Island in 1936 was restored in 1954 and again in 1997. Now it is a tourist attraction that plays music every hour during the day.

Why You Should Visit:
Be sure to visit the musical fountain on island's southern end, near Margaret Bridge – one of the biggest in Europe and definitely worth checking out for its fabulous waterworks, repertoire, and light show.
Image Courtesy of Wikimedia and Abdeaitali.