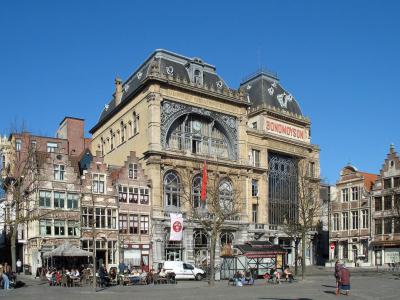 Bond Moyson is part of an imposing complex whose monumental façade has dominated Vrijdagmarkt (Friday Market Square) in Ghent for over a century. The complex was designed by architect Ferdinand Dierkens, commissioned by the Belgian socialist politician Edward Anseele, and was inspired by the Grands Magasins in Paris. Its right wing, Bond Moyson, was built in 1899; the left wing, called Volkshuis Ons Huis (People's House Our House), in 1902.

Bond Moyson's façade, adorned with socialist allegorical scenes, was created by Jules de Bleye. It is made of bluestone with a dome-shaped covering with Neo-Renaissance ils de bœuf (“bull's-eye” window). The rooster on top of it, they say, announces a “new dawn” – the era in which everyone will be equal and happy. Beneath the rooster, the coat of arms features “three eights” – “Eight hours of work, eight hours of leisure, and eight hours of rest” – a slogan which appeared in all workers' demonstrations in the early 20th century.

The side bays are framed on two levels by fluted columns, extended on a third level by Corinthian order pilasters which support a wide entablature, bearing in gold letters the slogan “Werklieden Aller Landen Vereenigt U” (Workers of all countries, unite!). This inscription is surmounted by a large cartouche on which appears the name “Bond Moyson” in large red letters, framed by two caryatids.

The central part of the building, with a large glazed surface, resulted from later modifications.

The left wing, Ons Huis, currently houses the center of socialist workers' associations of East Flanders, and is therefore often colloquially referred to as the “Socialist Building”.
Image Courtesy of Wikimedia and Marc Ryckaert.
Sight description based on Wikipedia.