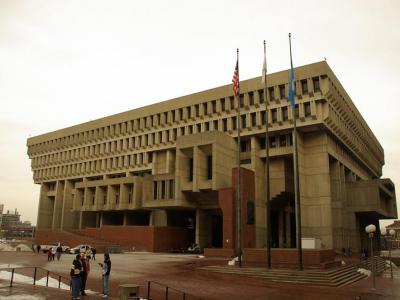 Boston City Hall has been sparking furious debates about architecture for the last forty years and you really should go and have a look at the building to see what all the fuss is about.

Built in 1969 by architects Kallman McKinnell and Knowles, this is the seat of the Boston Municipal Government. The lowest portion is partially built into the hillside and houses the public department of the city government. The central portion is where the mayor and city council have their offices and the council chambers. The upper floors are given over to the administration and planning department offices. It’s a labyrinth of corridors, stairways and offices and has been condemned as space wasting and energy unfriendly.

The building is in the 'Brutalist' style, an off-shoot of the modernist architectural movement. Le Corbusier was a follower of this style and it’s true that the city hall greatly resembles the monastery he designed in La Tourette. "Brutalist" comes from the French "beton brut", literally "rough" or "unadorned" concrete, an idea of Le Corbusier. A lot of modernist architecture is very eye-catching, and the city hall is certainly that, but whether in a good or bad way is still at the center of argument.

Tip:
Free admission through security (be ready for a bag check & metal detector) – explore it!
The City Hall plaza with the cool BOSTON sign is well worth checking out as well.