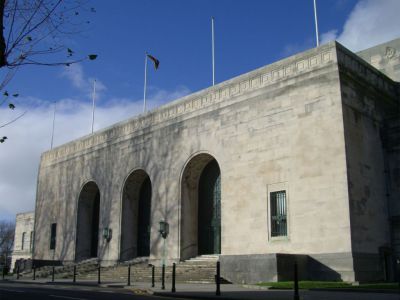 The Brangwyn Hall is a concert venue. It is named after the artist Frank Brangwyn, whose famous "panels", originally intended for the House of Lords, are displayed there.

The Brangwyn Hall is part of the Swansea Guildhall complex, and is used for awards ceremonies and social events as well as classical music concerts and rock concerts. The BBC National Orchestra of Wales frequently use this venue when performing in Swansea. Additionally, the BBC has filmed some scenes from the Doctor Who episodes "Silence in the Library" and "Forest of the Dead", as well as "The Big Bang".

The British Empire Panels were commissioned in 1924 as a means of commemorating the First World War. Brangwyn, who had worked as an official war artist, chose to create a "decorative painting representing various Dominions and parts of the British Empire", and five finished panels were displayed in 1930. The work was completed in 1932, but the House of Lords had already rejected it as too colourful and spirited.The town of Swansea was in the process of erecting its new Guildhall, which included a large assembly hall. The ceiling of this room was raised in order to show off the panels, and the building was inaugurated in 1934.