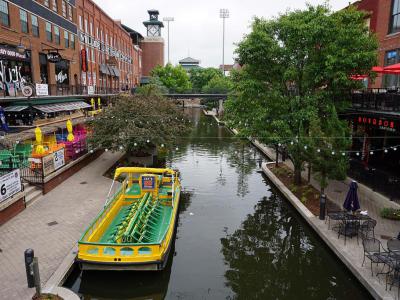 Bricktown is an entertainment district just east of downtown Oklahoma City. The major attractions of the district are the Chickasaw Bricktown Ballpark, the navigable Bricktown Canal, and the 16-screen Harkins movie theatre. Toby Keith's I Love This Bar & Grill is located in Bricktown, as is the corporate headquarters of Sonic Drive-In. The district's boundaries include the Oklahoma River on the south, I-235 on the east.

District is as follows: An area bordered generally by the BNSF Railway; Reno Avenue; Centennial Expressway; and the railroad right-of-way between Main and NE 1st. Four railroad companies had freight operations east of the Santa Fe tracks in what is now Bricktown in the late 19th and early 20th century. The district contains a number of public sculptures and murals, including a monument to the Oklahoma Land Run. An annual Bricktown Art Festival is held in mid-July.