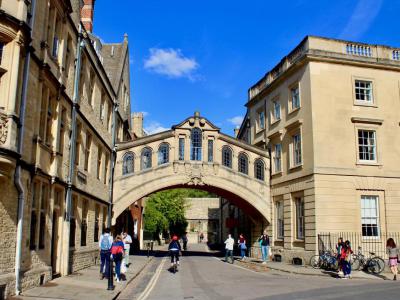 Bridge of Sighs, Oxford (must see)

Unfortunately, if you are not a student of Hertford College, you won’t be able to cross the Bridge of Sighs, but you can certainly admire it from street level and add a photo of it to your collection of Oxford’s marvellous structures.

The real name of the bridge is the Hertford Bridge and it was built in 1914 by Sir Thomas Jackson. It took its popular name from the fact that it is supposed to look just like the bridge of the same name in Venice. Actually, it resembles the Rialto Bridge more than anything else, but the Bridge of Sighs sounds more romantic.

The bridge is a fine example of the Quadrature of the Parabola, developed by Archimedes in the 3rd century BC – a rather difficult geometrical concept in that the area of a parabolic segment is 4/3 of a certain inscribed triangle. It all comes down to the triangle (top) of the bridge being supported by the arch (parabola) because they are of the same base length and height.

Leaving the Maths lesson behind, the bridge is covered and glass panelled and links the college’s Old Quad with the New Quad. According to popular legend, the college once closed the bridge to overweight students, forcing them to get some exercise by taking the long route from one building to another.

***Harry Potter Walk***
Conveniently easy to spot behind Oxford’s very own Bridge of Sighs, the ancient (almost 200-year-old) giant Oak Tree, featured during a duel between Harry Potter and Draco Malfoy in Harry Potter and the Goblet of Fire, can be seen in New College Cloisters. And while the cloisters themselves are closed to the public, a photo of the tree can still be snapped from the roadside!
Image by subherwal on Flickr under Creative Commons License.