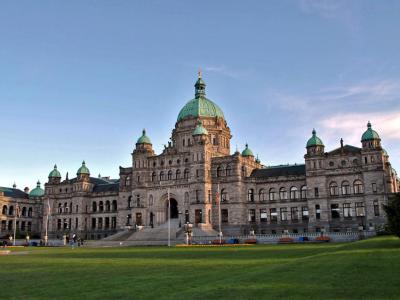 The Neo-baroque buildings face north on Belleville street facing the Inner Harbour and diagonally across from The Empress Hotel. A statue of Queen Victoria stands on the front lawn as well a statue of a soldier to commemorate the province's World War I, World War II and Korean War dead. Atop the central dome is a gold-covered statue of Captain George Vancouver. Free guided tours of the facility are offered year-round.

Why You Should Visit:
The buildings and the surrounding garden knoll is spectacular, both at night and during the day.
Mesmerizing interior with mosaic tiles, painted ceilings, and stellar stain glass windows.
You're able to take a self-walking tour or a guided tour of portions of Parliament.

Tip:
Make sure you do the indoor tour, as well as the garden tour – both are free!
You can also sign in at the security desk and visit the basement restaurant which is frequented by all the politicians.