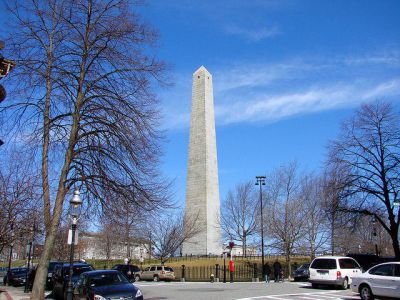 The Bunker Hill Monument was built to commemorate the Battle of Bunker Hill that was fought on June 17, 1775, during the Siege of Boston, in the early stages of the American Revolutionary War. The battle is named after Bunker Hill in Charlestown, Massachusetts, which was peripherally involved in the fight and is now one of the sites on the Freedom Trail.

It all started when the British attempted to fortify the unoccupied hills surrounding Boston in a bid to establish control over the city harbor. To prevent that, American colonial troops stealthily occupied Bunker and Breed's Hills and built there a line of defense. The British, once aware of that, mounted waves of attacks against the colonial forces and incurred severe casualties. The battle ended only after the defenders ran out of ammunition and proved somewhat Pyrrhic a victory for the British. Although tactically they won, the battle had clearly demonstrated that the inexperienced American militia were able to stand up to the regular British army.

The 221-foot granite obelisk was built between 1827 and 1843 with granite from Quincy, Massachusetts, and was delivered to the site via the Granite Railway built specially for that purpose, followed by a trip by barge.

Curiously enough, the Bunker Hill Monument stands not on the actual Bunker Hill but on Breed's Hill where most of the fighting took place. The Monument Association, which had purchased the battlefield site, was forced to sell off all but the hill's summit in order to complete the monument. An exhibit lodge built adjacent to the monument in the late 19th century houses a statue of Warren and a diorama of the battle. Leading to the top of the monument are 294 steps.

Why You Should Visit:
The views from the top are worth it and so is the whole exploration effort.
If you're doing the Freedom Trail, you owe it to yourself to keep dragging along to this.

Tip:
Visit early in the day, when you are not tired, or after a meal, and/or visit after you have gone everywhere on the Freedom Trail so that you can name the places and buildings seen from the top.
If you go down the hill to the Bunker Hill Museum, they have a bathroom you can use. A good place to learn about the history of the city and the Battle for Bunker Hill.