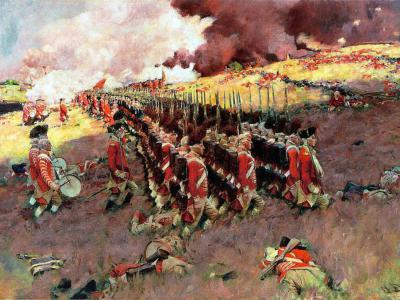 The Bunker Hill Museum is located just across the street from the Bunker Hill Monument and is housed in the old Charlestown Branch building of the Boston Public Library. Even if you don't intend to visit the museum but want to go up the monument only, you'll still have to go to the museum to get a virtual ticket.

The compelling exhibits of the museum tell the story of the battle and its commemoration, plus the story of the Bunker Hill Monument construction and the history of the Charlestown community. Events are described without bias, relying on the actual facts rather than rhetoric.

Among other things here you will find a fascinating 360-degree cyclorama mural of the battle showing the disposition of forces, refurbished dioramas including that with narration on the second floor that takes you through the entire battle, and those depicting Boston and the coastline back in the day, plus a number of other excellent interactive displays and artifacts. The latter are all authentic, not replicas, including an original drum captured from the Brits during the battle. The onsite bookstore carries an excellent collection of books on all things “Bunker Hill”.
Image by The original was owned by the Delaware Art Museum on Wikimedia under Creative Commons License.
Sight description based on wikipedia