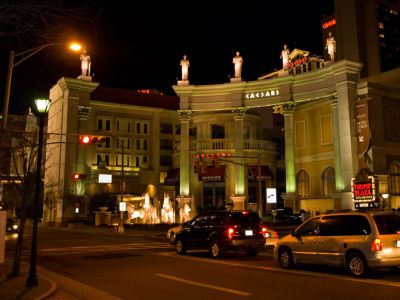 Caesars Atlantic City is a luxury hotel, casino, and spa resort in Atlantic City, New Jersey. Like Caesars Palace in Las Vegas, it has an ancient Roman theme. Atlantic City's second casino, it opened in 1979 as the Caesars Boardwalk Regency. The 124,720 sq ft (11,587 m2). casino has over 3,400 slot machines, and is one of the largest in Atlantic City. The resort has experienced much expansion and renovation in the past decade, including a new hotel tower, a new parking garage, and a new shopping center, The Pier Shops at Caesars.

Caesars purchased the 11 year old Howard Johnson's Regency Motor Hotel in 1977 and announced that it would renovate the 11-story, 425-room structure and add seven floors to the building, expanding the room count to 548, plus a 52,000 sq.ft. casino. Despite the governor of New Jersey's demands, the Casino Control Commission allowed Caesars to use the Howard Johnson building due to it being relatively new construction. In 1987, the name of the resort was changed to Caesars Atlantic City.
Image by William Warby on Wikimedia under Creative Commons License.
Sight description based on wikipedia

Want to visit this sight? Check out these Self-Guided Walking Tours in Atlantic City. Alternatively, you can download the mobile app "GPSmyCity: Walks in 1K+ Cities" from iTunes App Store or Google Play. The app turns your mobile device to a personal tour guide and it works offline, so no data plan is needed when traveling abroad.