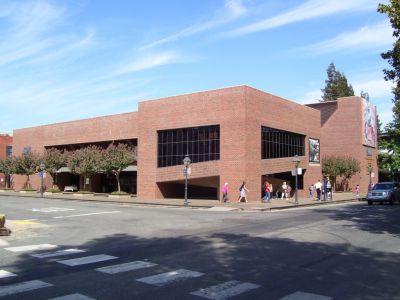 The California State Railroad Museum is a museum in the state park system of California, interpreting the role of the "iron horse" in connecting California to the rest of the nation.The museum features 21 restored locomotives and railroad cars, some dating back to 1862. Other exhibits show how the influence of railroads changed American society, influencing travel, commerce and daily life, as well as the lives of railroaders and the diversity of people who work on railroads. Changing exhibits featuring photography, ephemera, and artifacts from the museum's collection. Adjacent to the main museum building is reconstruction of the 1870s-era Central Pacific Railroad passenger station and freight depot on Front Street, which houses historic and contemporary railroad equipment.
The museum has its origins in 1937, when a group of railroad enthusiasts in the San Francisco Bay Area formed the Pacific Coast Chapter of the Railway & Locomotive Historical Society. This organization worked for years to promote the idea of a railroad museum, donating 30 historic locomotives and cars to the California Department of Parks and Recreation to be the nucleus of a State-operated museum in Sacramento.
Opening hours: Monday - Sunday: 10 am - 5 pm
Image by Swampyank on Wikimedia under Creative Commons License.
Sight description based on wikipedia

This sight is featured in a self-guided walking tour of Sacramento, California within the mobile app "GPSmyCity: Walks in 1K+ Cities" which can be downloaded from iTunes App Store or Google Play. Please download the app to your mobile phone or tablet for travel directions for visiting this sight. The app turns your mobile device to a personal tour guide and it works offline, so no data plan is needed when traveling abroad.