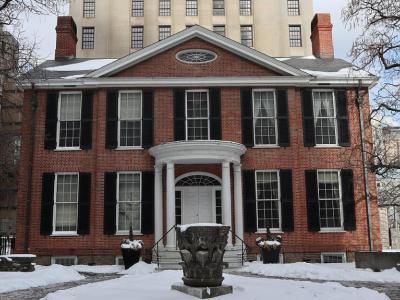 Built by the Sixth Chief Justice of Upper Canada, Sir William Campbell, and his wife in 1822, the Campbell House is the oldest remaining house from the original city of York in Toronto. Lady Campbell inherited this Georgian-style house after the death of William Campbell in 1834. All contents of the house were auctioned after her death and until 1890 it served as a residence for local notables.

Originally, the house was on Adelaide Street East and after 150 years, the 300-ton house was shifted to University Avenue with an assistance from the Toronto Transit Commission. A campaign was launched by the Advocates Society to save the house when its last owners, Coutts-Hallmark Greeting Cards Company, decided to demolish it in 1972. On April 1st 1972, the house was fully restored and opened by Her Majesty Queen Elizabeth.

Designed for comfort and entertainment, the House was constructed when the Campbells were socially and economically established. After the Campbells, it was used by a horseshoe nails company and elevator company as an office and factory, respectively. Today, the house operates as a museum that educates both tourists and locals about the lifestyles, trends and tit-bits from the bygone era. Visitors are offered guided tours of the property and can enjoy educational programs like historic baking, Scottish dancing, storytelling, etc. It also serves as a club for the members of Advocates Society.