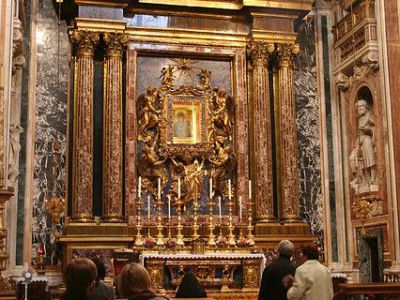 The Cappella Paolina (Pauline Chapel) is a chapel in the Vatican Palace separated from the Sistine Chapel by the Sala Regia (Regal Room). This beautiful chapel was designed in 1538 by Antonio de Sangallo the Younger, commissioned by Pope Paul II. It was used as the Chapel of the Concave and the Chapel of the Sacrament.

There was never any question in the pope’s mind as to which master artist would execute the chapel’s frescoes. He wanted Michelangelo, but the artist was over 60, tired and already trying to finish the tomb of Pope Julius II – a commission for which he had already been paid. The pope insisted and Michelangelo felt he had no choice but to agree. The two frescoes he painted, “The Crucifixion of St Peter” and “The Conversion of Saul”, weren’t considered his best works, and possibly the pressure he had been under to paint them showed in his work. His “Saul”, who had been a young man in his early thirties at the time of his conversion, is represented as an old man, white haired and world weary, which was perhaps a reflection of Michelangelo himself.

Other paintings in the chapel are by Lorenzo Sabbatini and Federico Zuccari. The statues and stuccowork are by Prospero Bresciano. In 2004, the Vatican announced plans to restore the frescoes in Cappella Paolina. Work was completed in 2009, revealing bright colors and hues that had been dulled by centuries of dirt and grime. In 2010, the Vatican website released a virtual reality rendered version of the Cappella Paolina. It presents the chapel in part 3D rendering and part high-resolution photography, unquestionably made after the 2009 restoration.
Image by Fagerjord on Flickr under Creative Commons License.
Sight description based on wikipedia