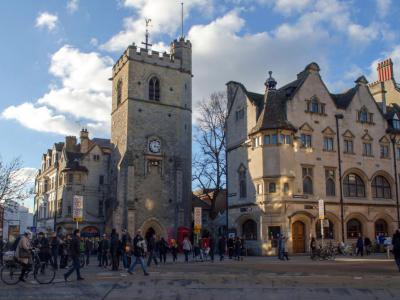 Carfax Tower stands at the junction of four streets – Cornmarket Street to the north, St Aldate’s to the south, High Street to the east, and Queen Street to the west – which is probably the exact geographical centre of Oxford.

The tower stands on the north-east corner of the junction and is the only remnant of the 13th century St Martin’s Church. From 1122 to 1896, this had been the City Church of Oxford until it was partially demolished to make way for a new road. Further road widening led to the rest of the church being pulled down in 1900.

The tower stands 23 metres high and no other building in the city is allowed to be higher. It has a ring of six bells that were cast in 1676 by Richard Keene. They still ring out the quarter hour, but the two quarter boys that used to strike them are no longer in use. The bells are rung on special occasions by the Oxford Society of Change Ringers.

Behind the tower you will see a solitary tombstone. It is that of William Butler, who was once the mayor of Oxford. He was buried here in 1865, but when the church was demolished, the tombstone was forgotten and, together with the tower, it is now classed as a Grade II listed building.
Image by Alison Day on Flickr under Creative Commons License.