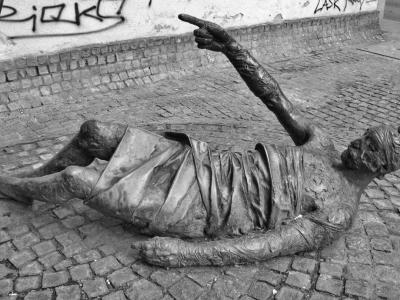 While wandering around the former Budapest Ghetto you will come across this memorial – half-hidden by trees – dedicated to Swiss diplomat, Carl Lutz. Made by Tamás Szabó in 1991, it consists of two bronze figures, portraying an angel on high sending down a bolt of cloth to a prostrate victim.

While serving as the Swiss Vice-Consul in Budapest, from 1942 until the end of World War II, Carl Lutz had saved thousands of Jewish lives by negotiating a deal with the Nazis and Hungarian Government to issue special Swiss safe-conduct passes to British-controlled Palestine. He deliberately used his permission for 8,000 protective letters as applying to families rather than individuals, and proceeded to issue tens of thousands of additional protective letters, all of them bearing a number between one and 8,000. He also set up some 76 "safe houses" around Budapest, declaring them annexes of the Swiss legation and thus off-limits to Hungarian forces or Nazi soldiers. Among the safe houses was the now well-known "Glass House" (Üvegház) at Vadász Street 29, in which about 3,000 Hungarian Jews found refuge.

In 1965, Yad Vashem (Israel's memorial to the Holocaust) awarded Carl Lutz the title of "Righteous Among the Nations", for his life-saving deeds.
Image by Tee Cee on Flickr under Creative Commons License.