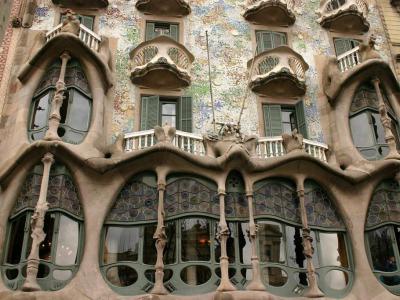 Casa Batlló – one of the highlights of Modernism and Catalan Art Nouveau architecture in Barcelona – is largely regarded as the ultimate masterpiece of Antoni Gaudí. Originally built in the 1870s, it was redesigned by Gaudí in 1904 in an astonishing renovation project that turned this relatively ordinary mansion into a work of art. Lovingly referred to by the locals as the “house of bones” for its almost bone-like balconies, or the “house of the dragon” for its roof resembling a dragon’s humped and glossy scaled back, this is certainly one of the weirdest-looking residential buildings of Europe.

There are not many buildings in the world that seem more like a living thing than an inanimate object, yet Casa Batlló achieves exactly that and its design feels almost alive. Any time – day or night, there is a small crowd outside, standing on the pavement staring up the wavy-shaped facade covered in a mosaic of fragmented colored glass and ceramic discs. Gaudí's use of light and color is wonderful, especially in the ceramics, and the curves soften the hard materials quite brilliantly. The building's interior is swirly and curvaceous, but to see it with your own eyes, you'll have to pay an admission fee which is somewhat steep compared to other attractions in Barcelona.

However, if you decide to go in, make sure to take a free audio-guide, as it really helps understand the historical and artistic context of the building. Now that all the rooms are devoid of furniture, this smart guide enables you to imagine what it was like when the original furniture and lighting were in place. As in the case of Casa Milà, Gaudí designed every single bit and piece here, right down to the very door handles, so as to ensure they fit in seamlessly, complementing the entire form and function.

Despite the presence of an elevator, visitors are encouraged to walk up the stairs to the rooftop, so as to soak up the atmosphere with its intricate textures and shapes – glass walls and tiles. At the end, up on the roof, visitors are rewarded with a scenic view of the area, as well as the up-close encounter with the roof itself including, of course, the signature twisted and tiled chimney pots looking as if they were brought in from a land far, far away...

Tip:
For a fee, you can get a photo taken on the small balcony at the front of the building (on your way down from the roof); both a printed copy and e-copy.