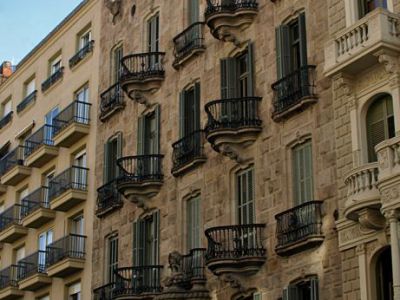 The Casa Calvet is located in Calle Caspe, Barcelona and it is built in the typical Catalonian style. It comprises four stories, excluding the first floor and basement, and also contains a roof terrace. It is one of the many splendid architectural sites in Barcelona duly appreciated by locals and visitors alike.

Antonio Gaudi was the mastermind behind the design of this building and was commissioned to this project by the son of Pedro Martir Calvet, the textile manufacturer. The choice was made based on the fact that Gaudi’s work had never failed to express modernity and proved successful with every design.

Initially, the initiation of the project was delayed because of the rejection of Gaudi’s plans based on the fact that the desired structure exceeded the space allotted to Gaudi. Gaudi, who had no intentions of altering the design to the likes of the municipal architect, sent the plans back without modifying them and threatened that if the plans were not permitted to be implemented as they were, the design of the structure would be severely compromised. Hence, the Casa Calvet was constructed in a strict accordance with Gaudi’s ideas. An epic structure completely representing Antonio Gaudi’s style of work, the Casa Calvet adorns Barcelona like many other historic structures that one can find in the city.
Image Courtesy of Wikimedia and Mutari.
Sight description based on Wikipedia.