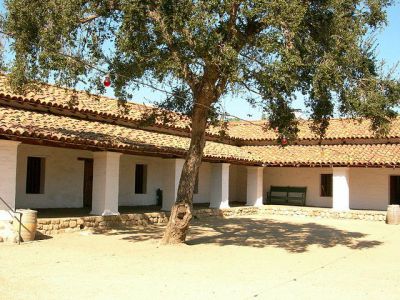 The Casa de la Guerra was the residence of the fifth commandant of the Presidio de Santa Barbara, José de la Guerra y Noriega from 1828 until his death in 1858. The site is currently owned and operated by the Santa Barbara Trust for Historic Preservation as a historic house museum.

The most significant changes in this time were the removal of the adobe columns in favor of wooden columns and the addition of wooden siding to the house.

The Casa is a Santa Barbara City Landmark, a California Historical Landmark, and is listed on the National Register of Historic Places (as a part of a composite object El Paseo and Casa de la Guerra).

The Casa de la Guerra interior is open to visitors Saturdays and Sundays, although the exterior may be explored any time.

This sight is featured in a self-guided walking tour of Santa Barbara, California within the mobile app "GPSmyCity: Walks in 1K+ Cities" which can be downloaded from iTunes App Store or Google Play. Please download the app to your mobile phone or tablet for travel directions for visiting this sight. The app turns your mobile device to a personal tour guide and it works offline, so no data plan is needed when traveling abroad.