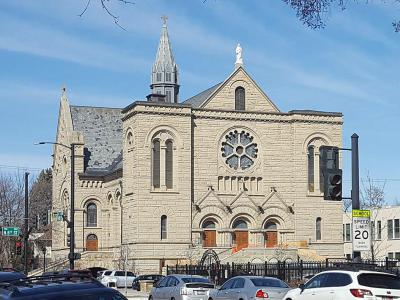 Cathedral of St. John the Evangelist, Boise (must see)

St. John’s Cathedral was designed by one of the first architectural firms to work in Boise, Tourtellotte and Hummel. It is built in the Romanesque Revival style and the Cathedral of Mainz in Germany was the model for its design. The stone for the exterior is Boise Sandstone that was quarried just outside of the city at Tablerock. The building is cruciform in shape and measures 170 feet from front to back, 95 feet at the transepts and 65 feet in the nave.
Image by kencf0618 on Flickr under Creative Commons License.
Sight description based on wikipedia

This sight is featured in a self-guided walking tour of Boise, Idaho within the mobile app "GPSmyCity: Walks in 1K+ Cities" which can be downloaded from iTunes App Store or Google Play. Please download the app to your mobile phone or tablet for travel directions for visiting this sight. The app turns your mobile device to a personal tour guide and it works offline, so no data plan is needed when traveling abroad.

Religious institutions in Boise cater to every community's faith and belief, thus offering a place for their services and worshiping. This tour will guide you through the discovery of the most interesting religious spots, both of architectural and spiritual value.