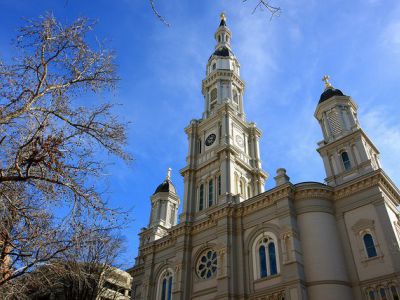 Cathedral of the Blessed Sacrament, Sacramento

Cathedral of the Blessed Sacrament in Sacramento is a cathedral of the Roman Catholic Church in the United States. It is the mother church and seat of Jaime Soto, the ordinary bishop of the Diocese of Sacramento. The Cathedral is located downtown at the intersection of 11th and K Streets. Currently, the cathedral is considered both a religious and civic landmark. It is the mother church of the diocese, which stretches from the southern edge of Sacramento County north to the Oregon border and serves approximately 975,000 Catholics. The diocese encompasses 99 churches in a 42,000 square mile region. The Cathedral of the Blessed Sacrament is one of the largest cathedrals west of the Mississippi River.

With construction beginning in 1887, Sacramento’s Cathedral of the Blessed Sacrament is an example of the strength and history in Sacramento’s architecture. The Cathedral of the Blessed Sacrament combines Sacramento’s history with its modern day life.In 1886, Patrick Manogue was appointed as Sacramento’s first bishop. Inspired by churches he’d seen in European plazas, Manogue modeled the cathedral after L'Eglise de la Sainte-Trinitein Paris. Once completed, there was no cathedral equal in size west of the Mississippi River. The building is a modified basilica form approximately 200 feet long and 100 feet wide, and it seats 1400 people. The central bell tower rises 215 feet.

The architectural style of the church is Italian Renaissance on the exterior and Victorian on the interior. The church has been updated for modern use, but designers tried to keep the church in the original style. Over the years, with repairs, changes in color schemes and changes to the liturgy, the Church lost its stylistic unity.
Image by TravelingOtter on Flickr under Creative Commons License.
Sight description based on wikipedia