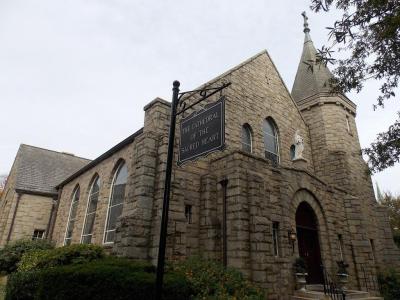 Cathedral of the Sacred Heart, Raleigh

Sacred Heart Cathedral serves as the Mother Church of the Roman Catholic Diocese of Raleigh and the throne of the current bishop of Raleigh. The cathedral is named after the Sacred Heart of Jesus and has a statue of Jesus Christ above its entrance. The cornerstone of Sacred Heart Church was laid in 1922 and the neo-gothic stone building dedicated in October 1924.

In December 1924, Sacred Heart Church became Sacred Heart Cathedral, the seat of the newly created Diocese of Raleigh, with the Most Reverend William Hafey of Baltimore as its first bishop. In 1939 the terazzo floors and the magnificent stained glass windows seen today were installed; later, marble altars and reredos were added.The interior of Sacred Heart Cathedral has undergone several renovations over the years, but in 1998 a sensitive and artistic restoration took place. Further improvements made in the following ten years returned the cathedral interior very nearly to its 1939 appearance.
Image Courtesy of Flickr and James Bradley.
Sight description based on Wikipedia.