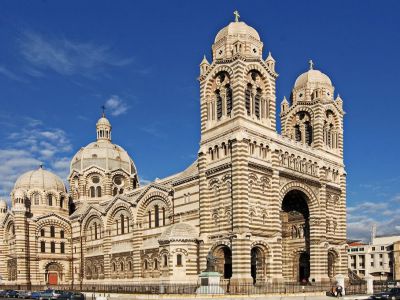 Also known as Cathedrale Sainte-Marie-Majeure de Marseille, it is actually two cathedrals, old and new. In the latter part of the 19th century Napoleon III, Emperor of France, decided to replace the 12th century provencal romanesque cathedral ("Vielle Major"). He had it demolished, all but the choir and one bay of the nave.

He spared the remnant when the outraged population demonstrated against the change. The new cathedral ("Nouvelle Major") is a massive Romanesque-Byzantine Revival structure. Towering over the waterfront, it is 469 feet long, and the main cupola is 231 feet high. It can hold up to some 3,000 souls.

It is located on the Plaza Major. The facade is formed of two different types of stone tile, giving the effect of horizontal bars of color. The locals were reminded of bedtime attire and they often refer to the cathedral as "the Pajamas", no offense intended. The interior features Carrera marble, Tunisian onyx, and Venetian mosaics.

Why you should visit:
This is an awesome structure. It declares not so much spiritual glory as it does the past glory of Imperial France. Dominating all around it, it declares power forgotten but never outdone. And besides, admission is free.