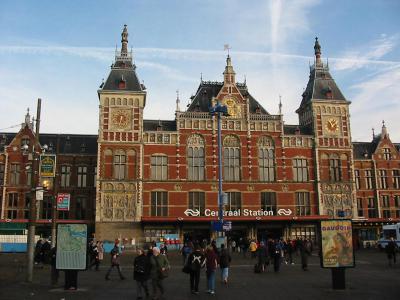 When in Amsterdam, you are bound to visit the Centraal Station, one way or another, at least once. With over 1,500 trains pulling in here daily, this is one of the busiest transportation hubs of the city, serving nearly 250,000 commuters per day. In this sense, this is a true heart of Amsterdam!

The Centraal Station began service at the end of the 19th century. Designed by architects P.J.H. Cuypers and A.L. van Gendt, it symbolized the rebirth of the country's once ailing economy.

An interesting fact about this station is that it was built on three man-made islands and its current location is not the one originally chosen. To erect the structure as massive as a railway station on the muddy soil, it took precisely 8687 wooden piles to support the structure. The entire project seemed like a huge blunder and was promptly condemned by many experts, but in the end, the architects managed to pull it off and proved the skeptics wrong.

Today, the Neo-Gothic building stately rises over the banks of the river IJ delighting the numerous beholders, much as the commuters using it daily to get to/from Amsterdam, with its colossal presence and the engineering genius behind its creation.

Why You Should Visit:
A mass transit and cosmopolitan fever hotspot, harmoniously blending neo-Renaissance architecture and modern technology.

Tip:
There are several (free) ferry trips through the canals running from here every 5 or 15 minutes which are very worthwhile. You can cruise right back to the station on the boat if you want to.
Image Courtesy of Flickr and Joost Witteveen.